1424 - Confirmation Charter was presented by Richard Beachamp, Earl of Warwick and Lord le Despenser, Lord of Glamorgan on October 20

1539 – The parish of Llantrisant, which extended to the Breconshire border was moved from the jurisdiction of the Abbot of Tewkesbury to the Dean and Chapter of Gloucester

1648 – Rev Thomas Bassett, vicar of Llantrisant imprisoned for being a Royalist for 12 years

1650 – The Baptist faith was first recorded in the town

1662 - Rev Henry Williams was ejected from Llantrisant for “misbehaviour”

1682 - A Quaker Meeting House was built at Treferig

1736 – The baptism of Hopkin Hopkins of Llantrisant, the world's shortest man

1741 - The Methodist movement was first recorded at Ty Newydd Farm. The leader, Thomas William drowned in the river at Treorchy

1750 – The parish church communion plate presented as “The gift of William and Jane Matthews, Llantrisant 10 October 1750"

1762 – The New Inn is recorded as being in property of Jesus College, Oxford

1767 – John Stuart, 1 Marquess of Bute took ownership of the estate.

1770 – The Guildhall in a “shocking state”. The Borough Scales and Weights were presented as “not fit for business”

1775 – Penuel Calvinistic Methodist Chapel (Bethlehem Chapel) was opened on 8 February, after their congregation of 50 regular Sunday members secured a lease of a house, stables and garden at Ffynnon Newydd on High Street

1779 - Llywelyn John and Rees John, overseers of the market, were presented at the Court Leet for being “very remiss in their duty in not weighting bread and butter and other commodities upon market days which belongs to  their duty to do so”

1780 - Watkin Evans became “surgeon and apothecary” of the town

1783 - The Corporation of Freemen warned that the Common was overstocked. On 5 December a Parish Vestry Meeting was held to “consult in regard of establishing a workhouse for the poor” at a time when vagabonds, prostitutes and thieves were rife in the town. It was agreed to open a Parish Workhouse

1787 – Anne Bassett presented a chandelier to the Llantrisant Parish Church

1794 - On 17 May the Parish Vestry decided to lease a property from Rev Gervase Powell of Llanharan including three burgage plots at the end of Swan Street. This was known as the North Workhouse. An inaugural meeting of the trustees was held in the 17 May. Beating the Bounds took place on October 10

1799 - The Corporation stated that “persons have turned scabbed and mangy horses on the Common. They are fined each for that offence”. The North Workhuse on Swan Street ceased to work

1800 - There were three charity schools in Llantrisant, but the system was "deplorable"

1802 - The Welsh Independent Movement started in the area

1803 - A Llantrisant youth, of nineteen, named David Williams was executed at Cardiff gaol for the murder of a boy

1809 - Jacob, a deacon, bought the lease of a piece of ground on 6 September from the Diocese of Llandaff adjactent to the parish church. He proceeded to build the chapel known as Yr Hen Ty Cwrdd Uchaf, or Bethel Chapel (The Upper Meeting House). Beating the Bounds was held on 13 May

1826 – Penuel Chapel was rebuilt. Beating the Bounds held in September

1827 – The Corporation disallowed bull baiting on the Bull Ring

1840 - Beating the Bounds was held on 19 October. Thomas Morgan Lewis became Llantrisant’s superintendent with six constables and a station was located in a building on Swan Street

1848 - A sporting foot race held on Llantrisant Common for £20. It featured “John Morgan of Llantwit and an Englishman. Won by the latter"

1851 - On 26 September Thomas S Harrison, son of Dr Harrison, was shot in the right side at Gwain y Crwth lane by running away from a person of the name of Barber.

1854 - Beating the Bounds held on October 16. Local residents petitioned for Sunday closure of the public houses

1862 - Welsh Independent members acquired, on lease, land at Cardiff Road, Penygawsi where the first Soar Chapel was erected on 25 November

1865 - A successful eisteddfod was held in the market place to raise funds for a Reading Room and Library at the Guildhall. In November a great commotion took place between the body of Freemen by the action of Lord Bute through his Trustee having given permission to T. Powell Esq to search for coal under the Common

1866 - A site for a National School was selected by J. S. Corbett, Esq., and the Vicar of Llantrisant. Sem Phillips published his "History of Llantrisant"

1867 - Llantrisant National School opened on the property of the Earl of Talbot and Shrewsbury who presented the land for use costing £2,000

1872 – The Parish Offices were built on Yr Allt on the site of the former Parish House. A smallpox epidemic swept through the town, resulting in the destruction of Glyn Terrace

1873 – Restoration of the Parish Church was undertaken by J. Prichard, costing £3,000. The east window was installed by Burne Jones

1876 – A Police Station was built on George Street

1883 – The death of Canon John Powell Jones at the Vicarage on 21 December. The Municipal Corporations Act was passed which effectively ended the Corporation of Freemen. Dr William Price's housekeeper Gwenllian Llewellyn gave birth to their son Iesu Grist, in August

1884 – Wesleyan Chapel built at Southgate. The cremation of Iesu Grist Price took place in January and subsequently Dr William Price appeared at a landmark court hearing. His success led to the passing of the Cremation Act

1885 – Llantrisant Parish Church came under the diocese of Llandaff

1889 - Llantrisant Town Trust was formed under the Charity Commission to manage to the land and rights of the Freemen. Llantrisant RFC was first recorded

1890 - The inaugural meeting of Llantrisant Town Trust took place on 31 January. The Billy Wynt was restored as a folly for £15.

1896 – Zozobabel Chapel on Swan Street was closed. A library and reading room was created in the place of the Cornmarket below Llantrisant Guildhall

1897 - On 30 June 30 a dinner was held at the Guildhall to celebrate Queen Victoria's Golden Jubilee. A copper gift chalice and paten, the gift of J. Coates Carter was presented to the Parish Church where the first baptistry by emersion took place with Grace Williams on 4 November.

1898 - Elim Chapel was constructed in fine Victorian style. Taliesin Morgan wrote "History of Llantrisant". The first record of a male choir in Llantrisant was during a concert on 1 March

1927 - Llantrisant Opera Society’s performance of The Magic Key. Llantrisant Freeman’s Golf Club moved from the Common to Talbot Green after massive opposition in the town

1932 - On 24 November Llantrisant bellringers completed a full peal 5040 Changes of Plain Bob Triples which is commemorated on a plaque in the belfry. This was rung in memory of the late Rev D H Simon

1939 – Filming of Paul Robeson's Proud Valley took place in the town. The last Welsh language services were held in the parish church

1947 - Beating the Bounds was held in June. Members of the Cremation Society, Lord Mayor of Cardiff and Llantrisant Town Trust gathered on the steps of Zoar Chapel where Penelopen Price unveiled the bronze plaque in memory of her father, Dr William Price. The new council estate, Dancaerlan, was officially opened

1949 – Llantrisant RFC, who celebrated the opening of their new pitch at Cefn Mabley, reached the Mallet Cup Final. The Charter of 1424 was placed with the Glamorgan Record Office in May

1953 – Llantrisan Workingmens Club opened in the Rock and Fountain public house. Dr J.C.R.Morgan retired as Llantrisant GP. The practice was taken over by his son, David. Festivities took place to mark the Coronation of Queen Elizabeth II

1956 – The new workingmens club built on site of three houses on Swan Street. Llantrisant Town Trust purchased Guildhall from the local council. Following the disbanding of the Home Guard, members enjoyed the facilities in the shooting range at the old quarry on Erw Hir

1965 – Vicarage demolished and a new house was built nearby

1967 - A new wooden pulpit was added by Miss Rosie Silkstone in memory of her parents. It was dedicated on 18 June

1968 - Beating the Bounds was held on 1 June. The Royal Mint opened at Llantrisant. The Queen, Duke of Edinburgh and Prince of Wales visited the site

1975 - Beating the Bounds held on 28 June. Dillwyn Lewis published "A History of Llantrisant"

1999 - Opening of the Royal Glamorgan Hospital.

2000 - "Llantrisant In Old Photographs" was published by Dean Powell

2002 – "Llantrisant Revisited" was published by Dean Powell. Penuel Chapel was closed. The film starring Christopher Walken, Brenda Bleddyn and Lee Evans called "Plots With a View" was filmed in Llantrisant

2010 - Beating the Bounds was held on 5 June. The television programmes "Indian Doctor" and "Dr Who" were filmed in Llantrisant.

2015 - Llantrisant was twinned with Crecy en Ponthieu. The businesses "Polkadot Teapot" and "Thom Botwood The Studio" were opened

2016 - The opening of the Royal Mint Visitors’ Centre was followed by the unveiling of the Llantrisant War Memorial. The £1.1million transformation of Llantrisant Guildhall was launched.

2019 - Llantrisant Guildhall reopened following a £1.4million restoration project to create a new heritage and visitors' centre for the town

Since the 1830s historians have benefited from a succession of ordnance survey maps of the old town of Llantrisant.

These help to illustrate the lay out of this complex, unplanned hilltop town with its many cobbled streets and narrow passageways.

View the various maps, designed over successive generations and you can see how this historic town continually developed throughout the 19th century on a footprint that has existed as the oval hilltop enclosure for almost a thousand years.

The Castle and Guildhall in 1824 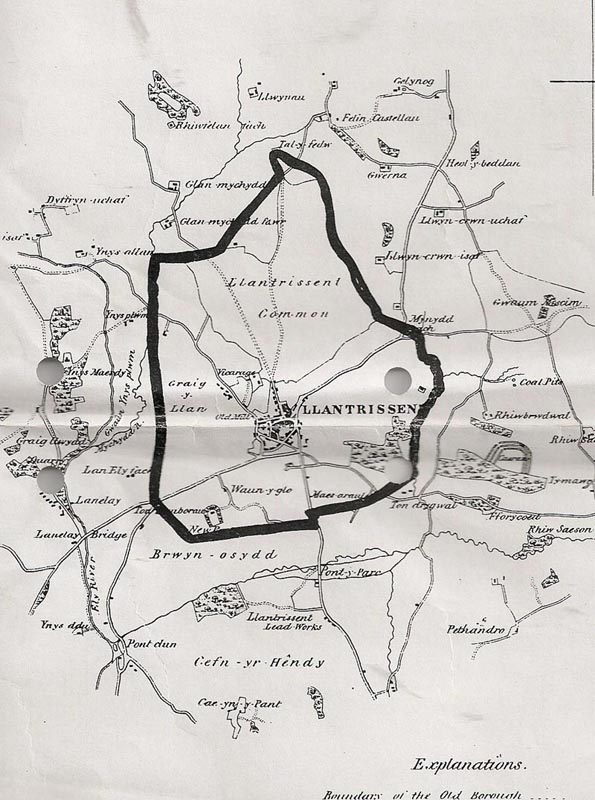 The Ancient Borough of Llantrisant (1832) 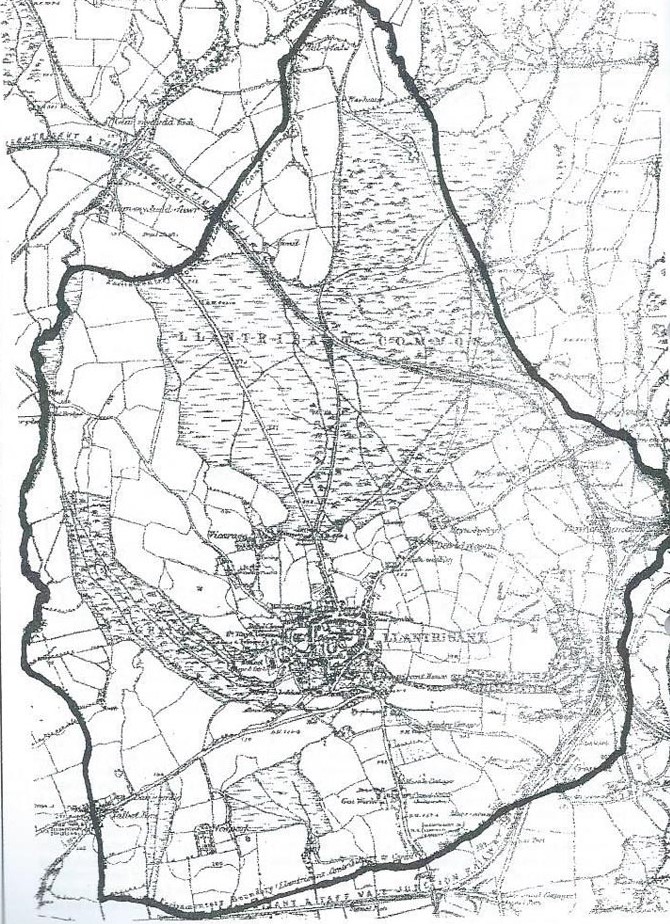 The Ancient Borough of Llantrisant (1875) 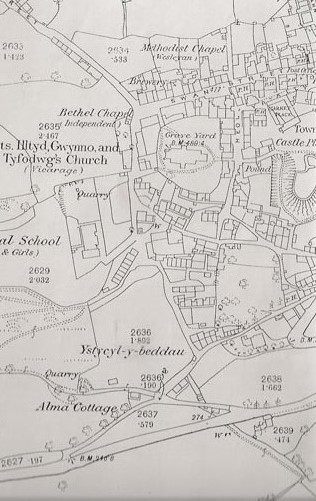 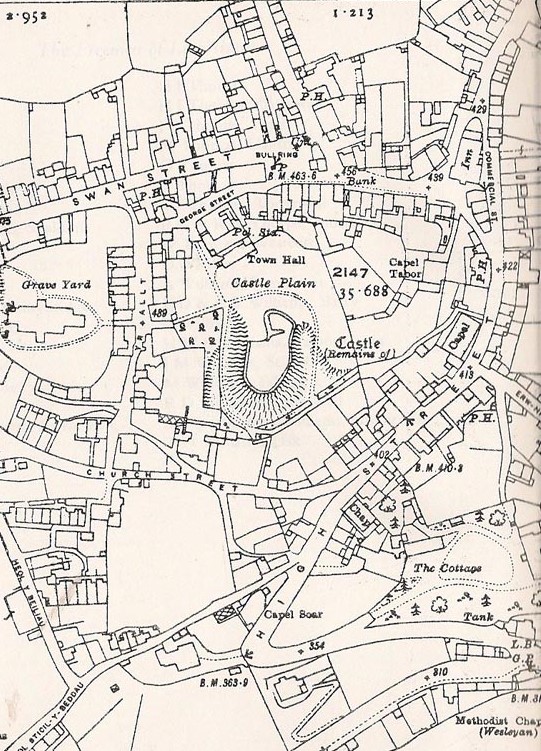