By December 1840 Major Rickards reported on the effect of the new police force, particularly in such an unruly town as Llantrisant. There as a consideration of reducing the force but this was disapproved and police of the county of Glamorgan were to be organized in conjunction with that of Llantrisant.

Each officer had to be under 40 and above 5ft 7ins without shoes. He had to be able to read, write and keep accounts, but could not be a pub landlord, gamekeeper, bailiff or parish clergy. One of the lock ups was known as the Black Hole, a prison cell with a strong iron grating and friends of the unhappy prisoner could pass him cheese, bread or for that matter beer.

One of the last incarcerated there was Evans the Runner, once of the fasters in the Glamorgan Militia who was making a row in the old town after too plentifully taking of ale. By August 1841 it was agreed that new lockups were required at Llantrisant and by November Pc Peter Best of Llantrisant was dismissed, to be replaced by Thomas Major. 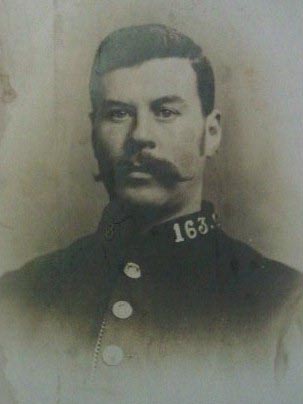 In 1842, shortly after a chartist mob fought at Penycoedcae, the Major took two prisoners but was attacked by the men who allegedly threw pepper in his face and knocked him unconscisous, rescuing the two prisoners who were handcuffed.

The growth of the local population was due to the coming of further industry locally and regular fighting between immigrant labour, such as the Irish, was frequent in the vicinity. The courts in Llantrisant were held every Friday at the guild all and the Cross Keys public house with monthly courts at the white hart in Pontypridd.

The lock-up was used in the basement of the Guildhall but when the Marquis of Bute gave the Guildhall as a school room to the town in December 1853 the cells were closed. Stocks were once kept in the Corn Market below and up until the 1830s were still in use. They had five leg holes and three men could be held there together for drunkenness. By 1857 the Llantrisant fairs were becoming more unruly and a constable was assaulted.

In 1848 Llantrisant enjoyed a sergeant’s station with P.C. Rees Rowlands as constable.  A newspaper report of the period read: “It is time some additional police protection was got in Llantrisant. On Saturday night there was a party taken for stealing fowls in the neighbourhood, and whilst the officer was taking them to the station-house at Pontypridd, four rows took place in the streets, which there was no officer here to prevent. It is to be hoped that the magistrates at the next sessions will consider the desirability of having a police-station here. “ 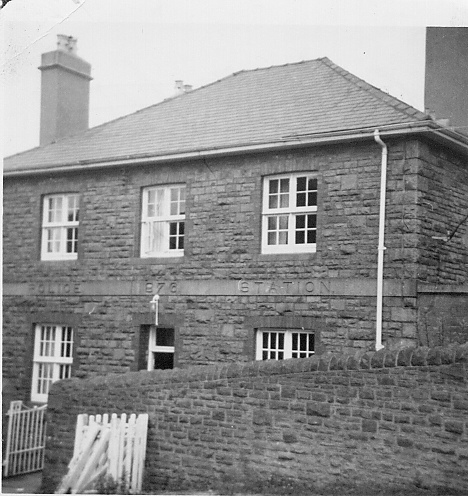 The Police Station opened on the site of the redundant market square off George Street in 1876 although its first year saw a tragic event occur in the cells. As one newsreport in October 1877 stated: “The inquiry into the death of Edward Hogan terminated on Saturday, the jury returned a verdict that death was occasioned by apoplexy, brought on by excessive drinking and exposure to cold. From the evidence of P.C. Dowen it appeared that a heating apparatus has been supplied to the station but that it failed to heat the cells. A hope was expressed that the authorities will take prompt measures to prevent any such sad occurrence in future.”

Sadly only a few years later this newspaper report of July 1879 explains one of the many dark events to have taken place in the locality: "On Thursday, the dead body of John Lewis, shoemaker, was found by Mr and Mrs Bowen at the Castle grounds, Llantrisant, with its throat cut in a horrible manner. The deceased had been drinking rather freely on the day previous. A razor was found by the side of the body".

The police station had a colourful existence, particularly as the place of imprisonment for Dr William Price after his arrest by PC Philip Francis No 163 on the night he attempted to cremate his baby son Iesu Grist. The child’s body was also kept there until the crown court trial was completed. Llantrisant Police Station remained in operation for the next century.

John Jenkins, the diarist of the George Inn wrote on September 26 1851: “Thomas S Harrison, son of Dr Harrison, was shot in the right side at Gwain y Crwth lane by running away from a person of the name of Barber.

"He only lived about an hour. He was a harmless, obliging and well beloved young man being only 20 years old”.

On first examining this entry, it comes as little surprise that the death of Thomas Harrison has always been considered Llantrisant's famous "murder" of the Victorian era.

Thomas Samuel Steel Harrison, the son of surgeon Neville Elmes Harrison was with his friend, collier David Richards when they went hunting rabbits on behalf of the invalid William Llewellyn in a field just beyond Newbridge Road belonging to Thomas Evans, the blacksmith.

They crossed the field belonging to Edmund Scott Barber, the surveyor of Llantrisant House when Harrison saw Barber on the property and shouted "Come back, Barber is in the field!"

Suddenly there was the sound of a gunshot and Harrison was found bleeding profusely from his side shouting "He has killed me; I shall never go over his lands no more."

Richards helped his friend towards Llantrisant when he collapsed. Residents John Evans and Mr Cooke Jnr came to help until Harrison's father, the surgeon, was called upon.

Dr Harrison saw that the gunshot had passed through his son's lung and he died in his mother's arms at their Llantrisant home.

The Coroner returned a verdict of accident death because it transpired that Harrison had placed his gun on the hedgerow and as he tried to make an escape from the field he fired it accidentally into himself.

The local myth that Barber himself was a murderer was untrue.