Clearly the Marquess had been conscious by 1815, that the benefits of such a school ought to be enjoyed by his town of Llantrisant. He had good personal reasons for this. Having entered into his estate only the year previously he had found his Glamorgan boroughs in the hands of local lawyers such as the Woods who exercised power over Cardiff.

The late vicar of Llantrisant, Robert Rickards, showing little interest in following his predecessors’ work in education had been most energetic in promoting the interests of the first Marquess in his little ‘rotten borough’. His son, Richard Fowler Rickards, had been appointed Town Clerk and was continuing the family tradition of loyalty. However, he was faced with a difficult situation as the ambitious Swansea lawyer, William Vaughan had recently established himself in the household of the Bassett sisters at Lanelay and was setting about establishing a political base in opposition to the Bute political interest. Rickards was alarmed when, in 1815, he found a huge increase in the number of new applications for admission as burgesses, mainly instigated and paid for by Vaughan. His instant reaction was to refuse to swear in any new burgesses. This caused much unrest in the town and Bute was advised by his agents that Rickards was perhaps a little too arrogant for the job of Town Clerk so he was transferred sideways to the post of Constable of the Castle.

The local situation was so delicate that the Glamorgan agent, Edward Priest Richards was himself proposed for Town Clerk of Llantrisant. This was a direct challenge to Vaughan who found an excellent excuse for whipping up opposition amongst his faction in the fact that Priest Richards could not speak Welsh. In 1818 the Vaughan faction commanded the support of four out of the twelve Aldermen and 121 burgesses out of 219 and a petition was sent to Lord Bute requesting that William Vaughan should be appointed Town Clerk instead of the monoglot Edward Priest Richards. The 1818 Court Leet was held a few days later in 1818 but the proceedings broke down in a most unseemly riot. It was a violent affair and the court was abandoned and retired to Llantrisant House where Mr Rickards lived.

In the long term however, Priest Richards was more than a match for Vaughan and the Bute interest prevailed. The agent’s diplomacy ensured that the affair was virtually forgotten in after years. There was no retribution against the burgesses who had rebelled. They were deemed too poor to be pursued in the Courts by the Marquess and when one of the leading rebels, Alderman Thomas Ajax, was suggested to Lord Bute as a candidate for the post of teacher at the school his lordship had no objection and, clearly, his agents took no steps to inform him of the candidate’s former delinquency. However, Ajax didn’t get the job! Nevertheless he enjoyed a long career as a leading and well-respected burgess as did other leading rebels, including the ringleader, Alderman Thomas Llewellyn.

These turbulent years may help to explain why Rickards took his eye off the ball in the matter of the school. In February 1825 the Vicar made bold to inform his lordship of the progress made. The school was up and running. Priority had been given to the children of burgesses but other children were then admitted to the point where the schoolroom was full at 92. The first object had been the education of the children, but sight had not been lost of the Lord’s interest in the Borough. Rickards, writing at the same time, put this more fulsomely " … it is impossible for me to recommend to your Lordship any plan for the benefit of this place that would be attended with more permanent advantage to the morals and welfare of the people than this, or can be the means of calling forth the blessings of parents, towards their bountiful benefactor – the popularity gained by dinners, cloaths etc. is soon forgotten, but this will long remain in the memory of a grateful mind." 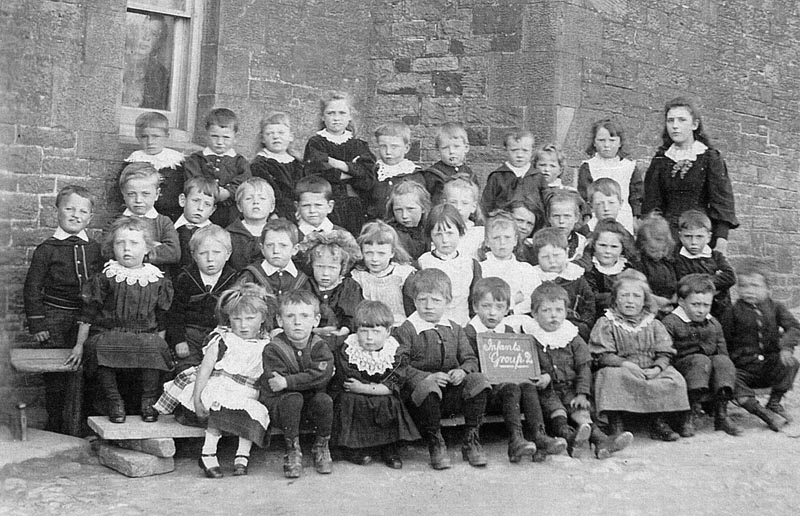 The Vicar, whose motives may have been somewhat different, took the opportunity to press the case of a girls school to follow immediately. The following September, Rickards reported that the boys had been moved from the Guildhall to New Park to make way for the girls, although no Governess had yet been found nor do we learn if ever one was.

The first master was Robert Cooke, a young man from the Bridgend area and, no doubt, a member of the family of that name who were for many generations copy-hold farmers and minor gentry at Llangan.

By 1828 a fifth class of boys had been enrolled and we have a full list of the pupils but no mention of the girls while a proposal to build a new schoolroom in the town had been abandoned until more reasonable tenders could be had. This problem had still not been resolved by 1840.

We hear no more about the girls and when, in 1840, Robert Cook resigned to take over the Cross Keys as an innkeeper we are not told where the boys were being taught. The new master was a young man by the name of Richardson.

The Marquess approved the plans for the new Schoolroom but the correspondence gives us no information if, when or where it was built.

The Llantrisant School in November 1828:

Those marked S are Subscribers’ sons.

The first parliamentary grant for education came in 1833 and was to be distributed through the auspices of the British and Foregin School Scoeity and National Society. After 1839 the Privy Council Committee of Education supervised the proper use of Parliamentary Grants. One of the conditions of the receipt of the grant was that the school was open to inspectors. By 1846 the church lost its grasp on education with the introduction of new management and the state felt justified in setting its own controls as it was providing £500,000 per year with £400,00 given to National Schools. Conditions were different with the abolition of the minor and pupil teachers, or apprentices were granted with training and grants rewarded.

A royal commission was set up under the Duke of Newcastle in 1858 to examine sample districts and report back to Parliament on the state of education. It was optimistic in the system but critical of the curriculum and attendance records of children. From 1864 a new and new daily routine of keeping a log book was introduced to contain specific matters.

The school managers at Llantrisant resolved that certain boys paid 3d a week towards their education although it was reduced to 2d a week in the 1868 recession and not raised again until 1883. If a child was sent to school without the fee they were sent home to their parents and as education was not compulsory, school master had a problem insisting on the a children’s attendance.

In October 1866, a site for a National School was selected by J. S. Corbett, Esq., and the Vicar of Llantrisant, on part of the Freeman's land. The Court Leet objected to part with it without a nominal rent of five shillings yearly for one acre being paid to them. Consequently that site was abandoned and they turned to the Early of Shrewsbury and Talbot for a better position in point of convenience and proximity to the highway.

The Llantrisant National School was opened in 1867 and later extended. They were built on West Caerlan, the property of the Earl of Talbot and Shrewsbury who presented the land for the use of the school, which cost £2,000 to build. The extension in 1872 was delayed because it “was impossible to get scholars because of the smallpox”.

The standard left much to be desired in the early days of the National School system in Llantrisant. Rev Powell Jones remarked that some of the children in the upper vision of the fourth class “could not write the letters on their slates from dictation.” The students were “found backward” and basic subjects were imperfectly taught.

In 1881 Danel Lloyd was headteacher and imposed strict discipline. He punished boys who were “obstinate” or refused to ring the school bell. The cane was given. “The cane accidentally caught his head and caused a swellin” he wrote. Cigarette smoking amongst the boys was a problem and many were punished for it”.

Llantrisant School taught thousands of children from the town through the 20th century before closing its doors in the early 1970s. In September 1974 a new primary school was opened on the woodland near the demolished Vicarage and named Coed Yr Esgob (Bishop’s Wood). The Victorian School reopened as a Welsh medium establishment with John Pugh as headmaster and Ysgol Gynradd Gymraeg Llantrisant existed until 2004. 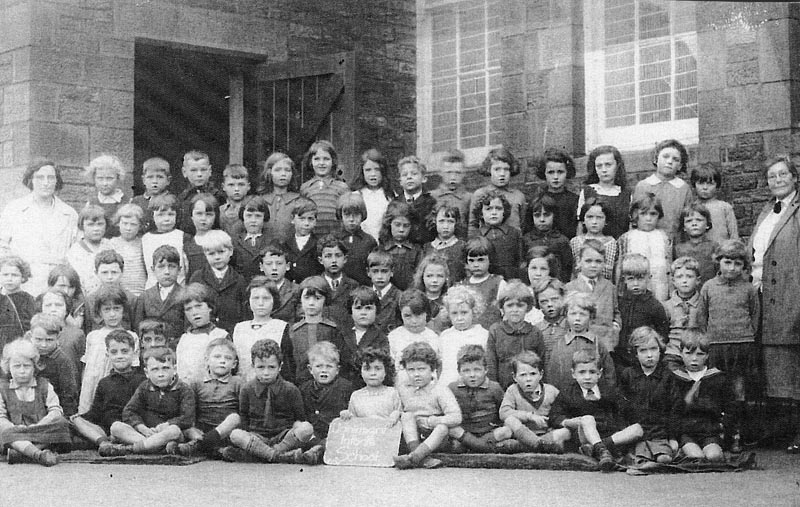 The Llantrisant School Register provides a fascinating insight into the lives of the children and the wider community members.

There were many reasons for absentees such as “collecting water for the Sulphur well for an ailing father” or “to ring the church bells” an to “attend he Calvinistic Methodist church for a prayer meeting against the cattle plague."

One boy was granted leave to have his shoes mended and others kept home to help with the harvest. At a time when the upkeep of the highway was down to the towns people one boy was recorded being absent for “looking after the toll gate.” In certain families child labour was necessary.

The log books show half day holidays for “walking the boundaries of the Old Corporation of the Borough”, now known as Beating the Bounds where boys were bumped on the two discernible boundary stones.

In 1887 the hot summer meant that boys were detained at home “to car water which is at this time very scarce.” Then again absences were also noted during blackberry picking season or due to a “Fives match”.

The wedding of a son and daughter of leading public houses “kept most of the children away.”

More notably was the arrival of the fair four times a year. On one occasion only 27 boys out of 101 on the roll were in school by 9.40am so the headmaster dismissed the student and attend the fair himself!

School closures were enforced because of diseases which could be contagious and virulent. Until 1875 children had to attend school on the day appointed for the annual examination even if they were ill.

At Llantrisant epidemics of smallpox, diphtheria and measles affected the children in the latter part of the 19th century.

The church was respected as many holidays were granted for the induction of Rev Joshua Pritchard Hughes. On the occasion of his marriage a half day was granted to celebrate the return of the vicar and his bride from their honeymoon. He was later appointed Lord Bishop of Llandaff. The school was closed for the day to mark the restoration of the parish church although boys had to “attend Restoration Services which were held throughout the day”.

The Queens birthday was a notable school holiday and a week’ off school was granted to celebrate Queen Victoria’s Golden Jubilee. At her death the boys marched to the Bull Ring and a “monster procession” was formed to the Guild Hall with a proclamation read by Mr Godfrey Clark of Talygarn of Edward VII on becoming king. The log notes that the “bells of the church were rung and the High Sherriff’s Trumpeters blew a fanfare”.

When Sir David Evans, the Lord Mayor of London, returned to Llantrisant a general holiday was given.