A smaller fort, Lle’r Gaer, with a much eroded single bank survives in Cwm Llwyd near Castellau. The Romans established a major iron smelting operation at Caergwanaf south of the Ely river from the 1st or 2nd century. There was also a Roman marching camp at Penycoedcae.

To the north of Llantrisant is an example of pre-Christian life at Tarren Deisant, a rock face with a natural spring on the west of Nant Castellau. Recorded in 1696 as “Tarren y ddau saint where two persons are engraved in stone, lying neere Cystelle”.  Possibly Celtic pagan belief regarded this as sacred waters but with the coming of Christianity and the use of two saints as the title doesn’t mean it was a holy well of Wales.

There are no historical references to Llantrisant by that name prior to 1246 when a Margam Charter makes references to the castles of “Neth et Landtrissen”. By the time of the death of Earl Richard e Clare there is evidence of a town emerging under the wall of the castle. The practice was for the lord of the castle to lay out building plots which would be let to new townsmen.

However, evidently a sophisticated Celtic community lived here. The discovery of an inscribed cross slab dated to the 7th century implies an ancient settlement and references to fortifying the castle on an existing wooden fortress or offering a Charter of 1346 based on “ancient liberties” makes it clear that the hilltop has been occupied for many centuries.

With thanks to J. Barry Davies

An ancient town and borough was
This town called – tis a face
But this is altered by the town’s
New Corporation Act!

Town Hall where on Windsor chair,
On Friday’s Justice sits;
To fine men five bob and the costs
Who drink away their witts!

Between one and two thousand souls
Live in this little town
But every time the Church bells ring
Tis death has cut one down. 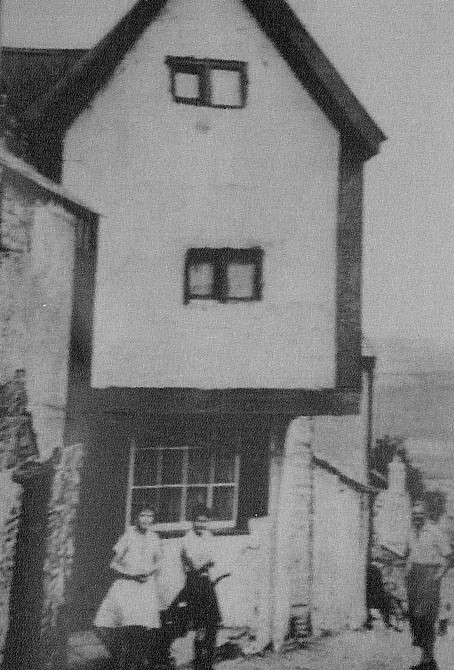 Fine schools it has, and they are made
Of native quarry stones
Built up in ’67 by aid
Of good old Canon Jones.

Now in this town I’ve heard folks tell
Besides a lot of people
There stands a Castle and as well
A gold old church and Steeple!

This town has two bands fife and bras
A Christmas time we cheer them
At other times of year alas!
We don’t so often hear them.

It has an Angel and Bear
A Fox and a Bluebell
A White Hard and I do declare
They all strong liquor sell!

It also boasts I here may state
A Bullring and a Pump
He first where bulls they used to bait
To make a tender rump!

Julia John was the wife of the Clerk to the Town Trust, Evan John of Castle House and published this poem in 1888. Their adopted daughter, Lillian married Rev Daniel Fisher who officiated at the cremation of Dr William Price