The French army moved forward late in the afternoon, around 4pm after it had formed up. As it advanced, a sudden rainstorm broke over the field of battle. The English archers de-strung their bows to avoid the strings becoming damaged; the Genoese with their crossbows could take no such precautions, resulting in damage to their weapons. The crossbowmen began their advance, however they had left their pavises back in the baggage train, and thus had no means of protection as they loaded their weapons. The Genoese moved within range and discharged their weapons. Damaged by the rain, the slackened crossbows had little effect on the English line. The English archers shot their bows in retaliation, inflicting heavy casualties on the Genoese, causing them to retreat. The knights and nobles following in Alençon's division, seeing the routed mercenaries, hacked them down as they retreated. Froissart writes of the event:

The English, who were drawn up in three divisions and seated on the ground, on seeing their enemies advance, arose boldly and fell into their ranks. The clash of the retreating Genoese and the advancing French cavalry threw the army into disarray. The longbowmen continued to discharge their bows into the chaos, while five Ribaldis, early cannon, added to the confusion, though it is doubtful that they had inflicted any significant casualties. The longbowmen loosed volleys of grey goose feathered arrows to extreme range, ten or more every minute. It was said, "Arrows fell like snow". Men and horses fell. Those reaching the bottom of the V were engaged at shorter range, where the longbow pierced armour.

With the Genoese neutralised, the French cavalry charged the English ranks, however, the slope and obstacles laid by the English disrupted the charge. The continued hail of longbow arrows inflicted mounting losses upon the knights, blocking successive waves of advance by the following ranks. The massed ranks could not break the English position, which subjected them to a relentless barrage of arrows, making many of the horses casualties. The Black Prince's division was hard pressed by the French attack, however Edward refused to send help with the comment; "Let the boy win his spurs".

The French cavalry made repeated attempts to charge up the slope, however with each successive wave more losses were sustained. In the course of the battle, the blind king John of Bohemia was struck down attacking the Black Prince's position. The struggle continued well into the night when Philip abandoned the field of battle. Philip had his horse killed from underneath him twice during the battle and may have taken an arrow to the jaw. His sacred and royal banner, the Oriflamme, which when raised meant that no quarter was to be given to the enemy, was also captured and taken, one of the five occasions this occurred during the banner's century spanning history. The battle ended soon after the French king fled, the remaining men-at-arms running from the battle.

By midnight, Philip's brother, Charles II of Alençon and his allies, King John of Bohemia and the Count of Flanders, Louis II of Nevers, as well as 1,500 other knights and esquires were dead. The men-at-arms and Genovese archers were not counted but estimates of the total slaughter varied between five and fifteen thousand. King Philip himself escaped with a wound. Edward resumed his march, now with prisoners for ransom, towards Calais, which he besieged without interruption and eventually took. After the battle, the blind King of Bohemia, was found as he had ridden into battle, chained between his knights less they loose him. All were present; all were dead, all clustered around their King. The Prince of Wales took his arms and wore his crest, three ostrich feathers girdled in a crown; he and all Welsh Regiments and military units have done so ever since.

The battle crippled the French army's ability to come to the aid of Calais, which was besieged by Edward's army the following month. Calais fell after a year-long siege and became an exclave of England, remaining under English rule until 1558. 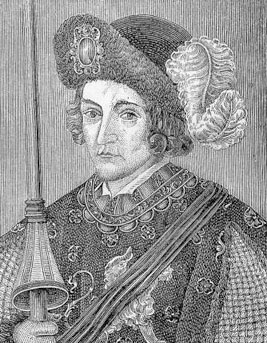 He was called "Edward of Woodstock" in his early life, after his birthplace, and since the 16th century has been popularly known as the Black Prince. He was an exceptional military leader, and his victories over the French at the Battles of Crécy and Poitiers made him very popular during his lifetime. In 1348 he became the first Knight of the Garter, of whose order he was one of the founders.

Edward died one year before his father, becoming the first English Prince of Wales not to become King of England. The throne passed instead to his son Richard II, a minor, upon the death of Edward III.

Edward had been raised with his cousin Joan, "The Fair Maid of Kent." Edward gained permission for the marriage from Pope Innocent VI and absolution for marriage to a blood-relative (as had Edward III when marrying Philippa of Hainault, his second cousin) and married Joan on 10 October 1361 at Windsor Castle. The marriage caused some controversy, mainly because of Joan's chequered marital history and the fact that marriage to an Englishwoman wasted an opportunity to form an alliance with a foreign power.

When in England, Edward's chief residence was at Wallingford Castle in Berkshire (since 1974 in Oxfordshire), or at Berkhamsted Castle in Hertfordshire. He served as the king's representative in Aquitaine, where he and Joan kept a court which was considered among the most fashionable of the time.[citation needed] It was the resort of exiled kings such as James IV of Majorca and Peter of Castile.

Peter of Castile, thrust from his throne by his illegitimate brother Henry of Trastámara, offered Edward the lordship of Biscay in 1367, in return for the Black Prince's aid in recovering his throne. Edward was successful in the Battle of Nájera (April 3), in which he soundly defeated the combined French and Castilian forces led by Bertrand du Guesclin. However Peter did not pay fully and refused to yield Biscay, alleging lack of consent of its states. Edward retreated to Guienne by July.

The Black Prince returned to England in January 1371 and died on 8 June 1376 (a week before his 46th birthday), after a long-lasting illness that was probably amoebic dysentery contracted ten years earlier while campaigning in Spain.Edward married his cousin, Joan, Countess of Kent (1328-1385), on 10 October 1361. She was the daughter and heiress of Edmund of Woodstock, Earl of Kent, the younger son of King Edward I by his second wife Margaret of France

Edward lived in a century of decline for the knightly ideal of chivalry. On one hand, after capturing John the Good, king of France, and Philip the Bold, his youngest son, at the Battle of Poitiers, he treated them with great respect, at one point giving John permission to return home, and reportedly praying with John at Canterbury Cathedral. Notably, he also allowed a day for preparations before the Battle of Poitiers so that the two sides could discuss the coming battle with one another, and so that the Cardinal Périgord could plead for peace. However, some argue "he may have been playing for time to complete preparation of his archers' positions."

On the other hand, his chivalric tendencies were overridden by expediency on many occasions. The Black Prince's repeated use of the chevauchée strategy (burning and pillaging towns and farms) was not in keeping with contemporary notions of chivalry, but it was quite effective in accomplishing the goals of his campaigns and weakening the unity and economy of France.

Edward the Black Prince seemed to have good health until 1366. It was not until his campaign in Spain to restore Don Pedro the Cruel to the throne of Castille that he became ill. On this expedition, his army suffered so badly from dysentery that it is said that one out of every five Englishmen would not return home. Edward the Black Prince contracted an illness on this expedition that would ail him until his death in 1376. It is widely believed that he contracted amoebic dysentery but some argue against the likelihood that he could sustain life with a ten-year battle with dysentery. He would often faint because of weakness. This run of poor health continued until his death in 1376, aged 45.

Edward died at Westminster Palace. He requested to be buried in the crypt of Canterbury Cathedral rather than next to the shrine, and a chapel was prepared there as a chantry for him.