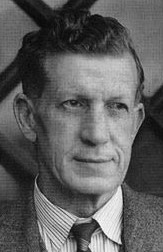 He served in World War I and on his return became one of the recruits of the Labour movement. An eloquent speaker, his fearlessness and courage won him many friends. He was regarded as the champion of the aged people in the Llantrisant Rural District Council and became President of the Old Age Pensioners’ Association.

He was twice chairman of the Llantrisant Rural District Council and was Chair of the Trades Council twice.

He married the daughter of Mr and Mrs Richard Williams of 54 High Street, Llantrisant. The couple later settled in 67 Talbot Road, Llantrisant with children Watcyn and Kitty.

During World War II he was chief Billetting officer for the evacuees and also served as a member of Llantrisant Town Trust and was Secretary of the Cwm Miners’ Lodge.

Ivor was instrumental in turning the Cefn Mabley field into a rugby pitch for Llantrisant RFC and played a leading role in the development of the club.

He also played a prominent role in the development of new houses in Llantrisant, Pontyclun and Talbot Green and supported many recreational and sporting activities.