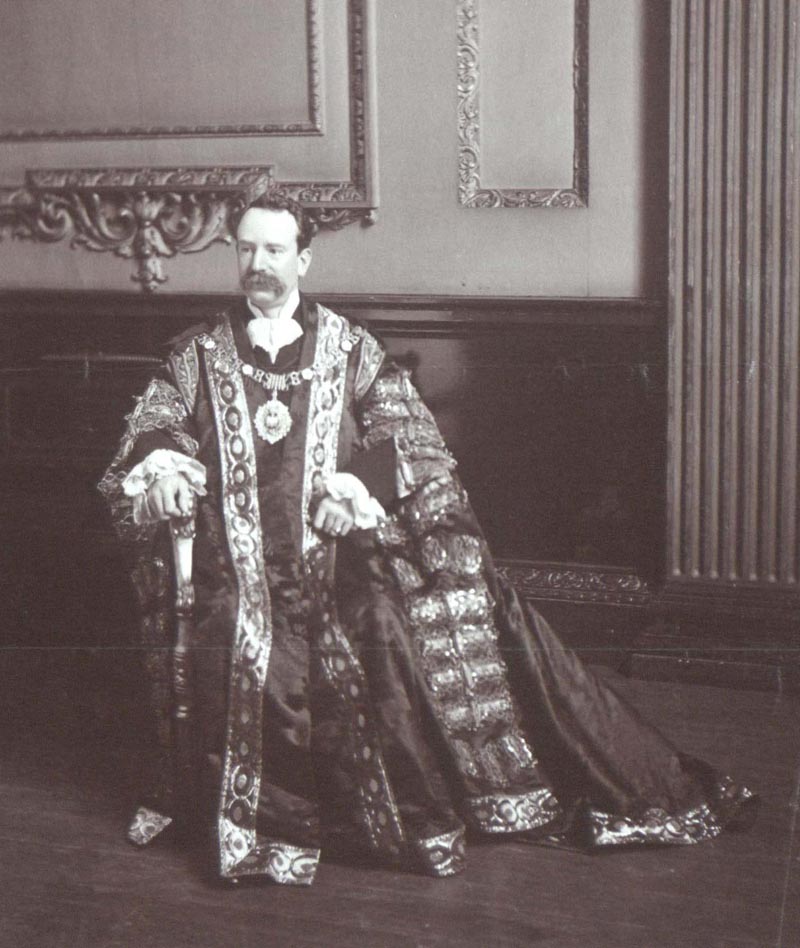 Born on 21 April 1849 in Glanmychydd Farm, Llantrisant  to Thomas Evans, a family of maltsters and farmers, he spent his childhood in Llantrisant, attending the local school, before being sent to a seminary at Merton in Surrey.

In 1866 his uncle, Richard Evans, head of the firm of silk merchants in Watling Street, London with brother Evan Evans, died during a visit to France. At the age of just 17, David Evans replaced him.

He completed his own education in the South of France and became an elected partner of the firm in 1868. Two years later he followed the tradition of his ancestry and was inaugurated into the Freeman of Llantrisant at the annual Court Leet on.

At the same time he married an Emily Boakes of Kent and settled in Ewell Grove, a mansion in Surrey. The couple had eight children – four sons and four daughters. In 1874 Evans was approached by friends in the ward of Cordwainer, City of London to become a candidate for the seat in the Court of Common Council.

He was elected an Alderman of the borough of Llantrisant in 1883 and in the following year became an alderman of the City of London for the ward of Castle Baynard. A year later he offered himself to the livery for the honourable office of sheriff of London and Middlesex, a post he held for the next two years. In 1891 he became the Lord Mayor of London.

In that year he was elected lord mayor and a deputation including the vicar of Llantrisant JP Hughes, Evan John, Dr Morgan, D Leyshon, J Treharne, E Treharne and Roderick Lewis presented Evans with a congratulatory address from the people of his birthplace. Spokesperson Evan John said: “We cannot but feel that this happy event sheds honour both on the Principality of Wales and upon the little Welsh town which boasts the unique privilege of having a Lord Mayor of London as one of its burgesses and a valued member of its town trust.”

Rev J Pritchard Hughes said that Llantrisant felt proud of him as a Welshman and a native of their town and rejoiced in the fact that one of their sons would: “take part in building up and maintaining the fabric of the great Empire to which they were proud to belong.”

The lord mayor responded with a passionate speech: “Please, be good enough to convey to my friends at Llantrisant how thoroughly I appreciate all they have done for me, and in now entering in my duties as lord mayor, I feel I shall be strengthened by the knowledge I possess that the Principality and my countrymen generously extend to me good wishes.” 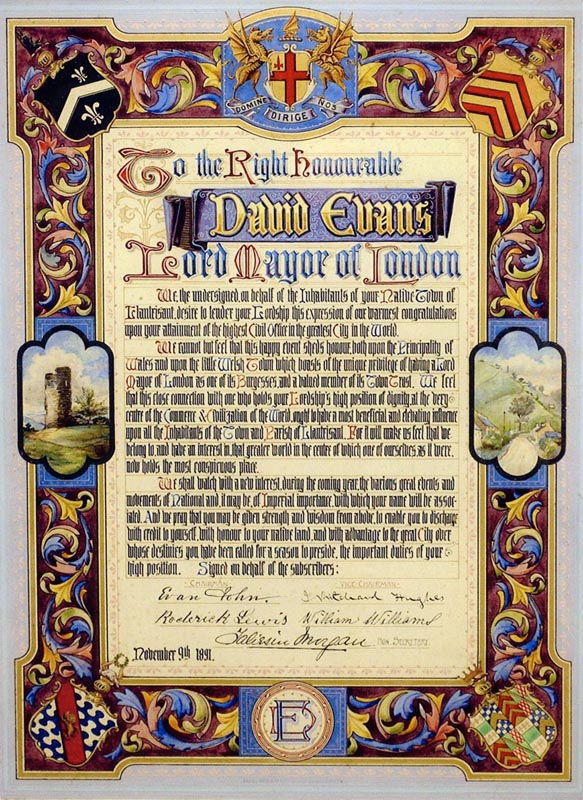 He went on to hold a Welsh banquet in the Mansion House in 1892 for the Welsh National Presentation testimonial fund and made a state visit to Cardiff in July 1892 where he stayed with Lord Bute at Cardiff Castle. Following a visit to the National Eisteddfod in Bridgend, and before an important engagement in Pontypridd where he would announce the South Wales Chair Eisteddfod ceremony on the Rocking Stone, he went home to Llantrisant.

The occasion was to open a bazaar in aid of Llantrisant Church restoration fund to help refurbish the tower and rehang the bells. It was a special event indeed, since it raised £400 and in the shadow of the tower itself his parents were buried. He was met at Llantrisant train station with a reception committee and the procession led by the band took him through the streets, lined with Sunday School choirs, banners and, according to extensive news reports, “boys on ponies”. Travelling in an open carriage, friends and former neighbours rushed out to shake his hand before he arrived at the Bull Ring to loud cheers.

He visited the Llantrisant National School and met the town vicar to open the bazaar, explaining how he wished his parents could have still been alive to see him come home as the lord mayor of London. A choir performed the four verses penned by Mr Fardo, postmaster of Cardiff, to the tune of God Bless the Prince of Wales. With one verse reading:

“Llantrisant from her mountains

And gives to mighty London

A leal lord mayor from Wales.”

On 30 July 1892 under Her Majesty Queen Victoria’s direction, he was made a Knight Commander of the Most Distinguished Order of St Michael and St George.