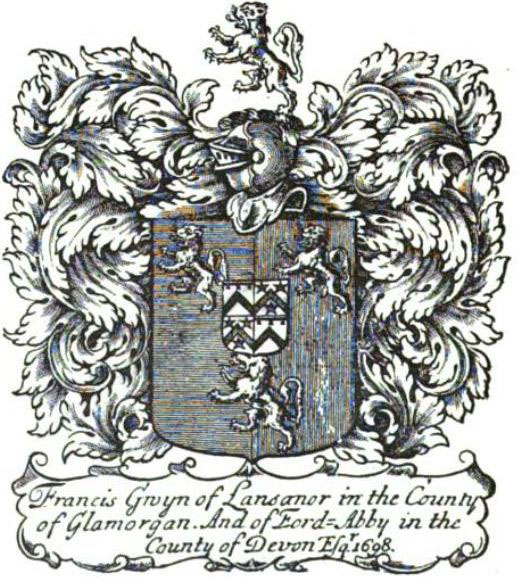 Francis Gwynne’s ancestors had been seated at Llansannor since the early 16th century. Though well-connected and claiming a descent from the Herberts, they seem to have played little part in Welsh politics.

Gwynne’s father Edward avoided commitment in the Civil War, despite his marriage to Eleanor, the sister of the parliamentary colonel Alexander Popham and daughter of Sir Francis Popham of Littlecott, Wiltshire.

Francies was born at Combe Florey in Somerset about 1648. He was trained for the profession of the law, but having ample means went into politics.

At a by-election in February 1673 he was returned for Chippenham. After the dissolution in January 1679 he remained outside the House of Commons discharging his official duties, but in 1685 was elected for Cardiff. In the Convention Parliament of 1689–90 and in its successor from 1690 to 1695 he sat for Christchurch in Hampshire, and on the latter, if not on the first occasion, he was recommended by Lord Clarendon.

He represented Callington, Cornwall, from 1695 to 1698, and was elected for Totnes in 1699 and 1701. From 1701 until 1710 he represented Christchurch, and Totnes again from 1710 to 1715. Gwyn was a Tory, and lost his seat on the accession of George I until in March 1717 he was re-elected for Christchurch. At the general election in 1722 he was returned for both Christchurch and Wells, when he chose Wells, and at the dissolution in 1727 he retired from parliamentary life.

In return for the sum of £2,500 Sir Robert Southwell vacated for Gwynne the post of clerk of the council, and he was sworn in on 5 December 1679, holding the office until January 1685. Until the death of Charles II he was a groom of the bedchamber, and he was twice under-secretary of state, from February 1681 to January 1683, under his cousin, Edward, Earl of Conway, and from Christmas 1688 to Michaelmas 1689.

When Lord Rochester was lord high treasurer under James II, Gwynne was joint secretary to the treasury with Henry Guy, and when Rochester was made lord-lieutenant of Ireland in 1701 Gwynne was his chief secretary, and a privy councillor. At one time he served as a commissioner of public accounts.

From June 1711 to August 1713 he was a commissioner of the board of trade, and he was then secretary at war until 24 September 1714, when he received a letter of dismissal from Lord Townshend. He was recorder of Totnes and steward of Brecknock.

The minutes of the business which he transacted during his periods of office were sold with the effects of Ford Abbey in 1846. He accompanied James on his expedition to the west in November 1688, and his diary of the journey was printed by C. T. Gatty  (1886). When the House of Lords met at the Guildhall, London, in December 1688, he acted as their secretary, and kept a journal of the proceedings.

By his marriage Gwynne eventually became owner of the property of that branch of the Prideaux family, including Ford Abbey. The property passed from the family on the death of J. F. Gwyn in 1846, and there was an eight days' sale of the abbey's contents. The sale of the place, some of which had belonged to Francis Gwynne, occupied almost the whole of the first day. The family portraits, collected by him and his father-in-law, were also sold.

In the grand saloon was hung the tapestry said to have been wrought at Arras, and given to Gwynne by Queen Anne, depicting the cartoons of Raphael, for which Catharine of Russia, through Count Orloff, offered £30,000; and this was sold to the new proprietor for £2,200. One room at Ford Abbey was called 'Queen Anne's,' for whom it was fitted up when its owner was secretary at war; and the walls were adorned with tapestry representing a Welsh wedding; the furniture and tapestry were also purchased for preservation with the house.