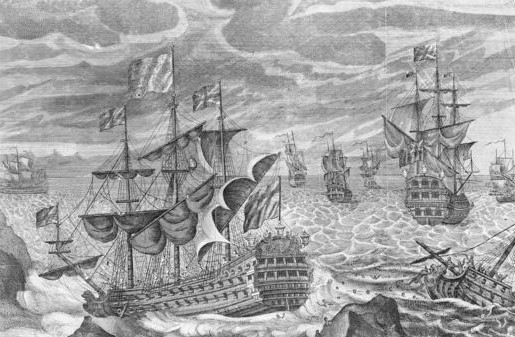 John Deere was the son of a petty squire of Penlline Court near Cowbridge and became well-known as the Chaplain to Sir Cloudesley Shovel (1650-1707), the Admiral of the Fleet.

It was typical for members of the Welsh clergy to join the navy as many Welsh parishes were very poor and the naval services was one way of supplementing a small income.

While returning with the fleet to England after the campaign at Toulon, Shovell's flagship, the HMS Association, struck the Outer Gilstone Rock near the Isles of Scilly at 8pm on 22 October 1707. HMS Association, a 90-gun second-rate ship went down in minutes. The HMS Eagle, HMS Romney and HMS Firebrand all sank that night.

With nearly 2,000 sailors lost that night, the Scillian incident was recorded as one of the greatest maritime disasters in British history.

The cause of the disaster has often been represented as the navigators’ inability accurately to calculate their longitude.

It was said Rev Deere swam ashore in the Scillies from the wreck of HMS Association laden with a quantity of its treasures. Sailors on another ship said there were no survivors that night.