At the Court held in May the jury presented four Burgesses, from whom the Constable of the Castle and Steward selected two to be Overseers of the Market for the ensuing year; they presented further lists of Freemen, from which were selected four to be Overseers of the Commons and eight to be Constables. As vacancies occurred among the Aldermen, the jury of one of the Court Leet, presented a sufficient number of Freemen, as Aldermen, to fill up the vacancies.

They acquired their title as Freemen by birth of the son of an admitted Freemen; by marriage to the daughter of the freemen; by apprenticeship to an admitted freemen or by gift. In practice they sometimes declined to swear in persons presented by the jury for freedom by gift. 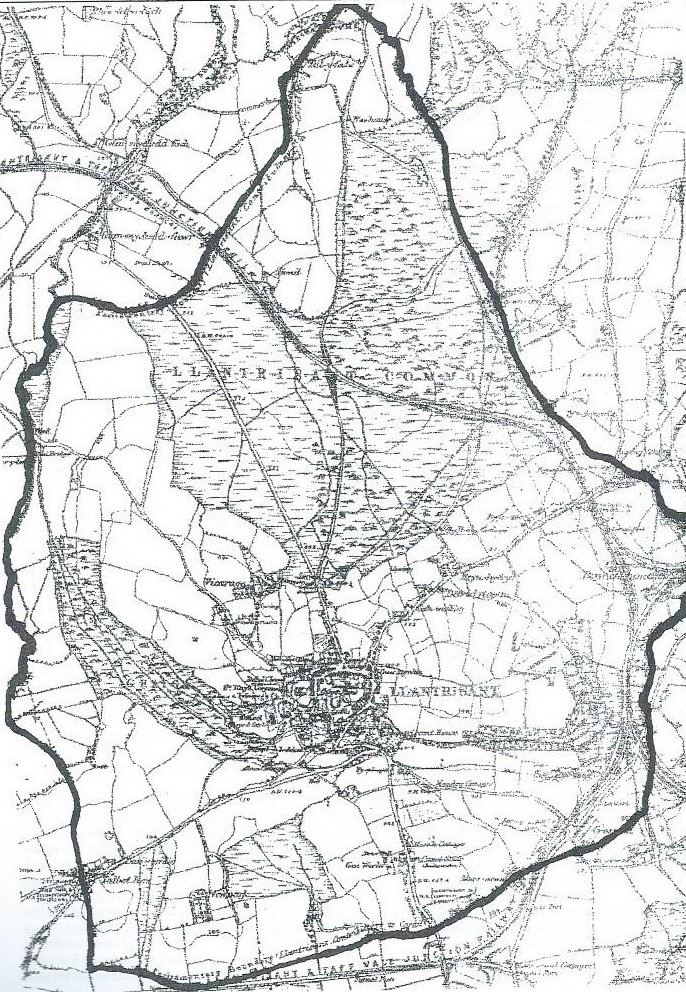 It was the duties of the Constable of the Castle together with the Steward, to preside together at the Court Leet and select and swear in the officers. The last Constable of the castle was Rev Hely Rickards of Llandough. The last stewards were James Andrew Corbett Esq, and Sir William Thomas Lewis.

The duties of Portreeve were to summon and attend the Court Leet and to receive the fees on the admission of Freemen. These were usually spent on the repair of the gates, entrances, drainage and general improvements of the Common and Graig and repair of the Town Pump. The Portreeve collected the Burgage Rents within the borough. It was also a custom of the Court Leet to present pieces of waste land within the Borough and subject to the approval of the Lord of the Borough, on payment of small sums varying from sixpence upwards.

It was the duty of aldermen to attend the Court Leet. One of them as in practice always selected as foreman of the jury. The Town Clerk was appointed by the Lord of the Borough and received a fee on admission of every freemen. It was the duty of the Sergeant at Mace to summon the Court Leet by precept from the Portreeve. He acted as crier of the court and received a fee for every admission of freemen.

The duties of the overseers of the market were to superintend the market and inspect the weights and measures. At fairs they were entitled for their own use to a toll from all non-freemen bringing their wares for sale. This was 2d up to 1883.

The overseer of the commons was appointed to superintend the land and prevent the trespassing of strange cattle. The duty of the freemen was to attend the Court Leet and they had the privilege to vote for membership of Parliament. Also the right of grazing on the Common land for their cattle and privileges of a Corporate Town, which was to sell their merchandise without paying a toll.

The Court Leet was a Borough Court in the case of Llantrisant and dealt with petty offences, common nuisances or public affray, maintenance of the assize of bread and ale and the condition of roads and ditches. In Llantrisant there was a combined Court baron and Court Leet which probably dated back to the Acts of Union of 1536 and 1543.This gave portreeves of Corporate towns in Wales the right to try actions by juries of six men but also had the right to try civil suits. The judicial functions of the borough court were taken over by the JP of the Quarter Sessions.

It appears that the Portreeve as chief magistrate hadn’t exercised any magisterial duty in the borough in the 19th century. By then it was concerned with the administration of the Commons, appointment of officers and admission of Freemen.

The earliest records of Llantrisant Courts Leet date from 1743 but record keeping was poor. For instance when Rev Robert Rickards became Portreeve in 1785 he was appalled to find no record of the admission of burgesses further back than 1780. This situation was inimical to the political interests of John Lord Mountsuart whose control over his boroughs depended on his ability to influence the votes of his burgesses. 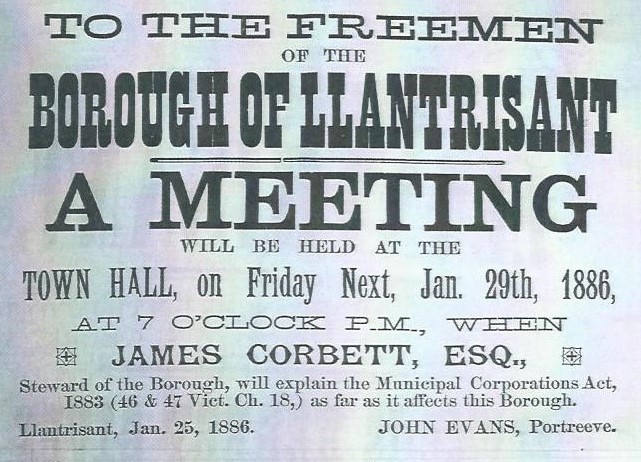 The Common was of prime importance to the burgesses and the earliest presentments of 1746 concerning the grazing of cows. By 1783 it was presented that the Common was overstocked and in 1799 hay-wards presented scabbed for many horses.

By 1770 the Borough Scales and Weights were “not fit for business”. The decline in the importance of the Courts by the end of the 18th century is marked by a presentment to hold a monthly court to regain the ancient rules and orders, but the proposal came to nothing.

The courts came to an end when the borough corporation was dissolved in 1889 and today’s Court Leet has no judicial powers.

The Freeman themselves would also swear an oath, stating: “You shall swear to be true to our Sovereign, Queen Victoria and the Lords of this Town and Borough; you shall be obedient to the Portreeve of the said Borough, for the time being, and obey his precepts and commands; you shall be civil and obedient to the Aldermen of the same, and also you shall as much as in your power lies, contribute and do every act and thing for the good government and safety of the Borough and the inhabitants thereof. So help your God.

"O Yea, o yea, o yeah. All manner of persons that have appeared this day at this Court Leet and Court Baron, may from hence depart, giving their attendance again on fresh summons. God save the Queen!”

His Honour Judge Falconer said of the Corporation of Llantrisant in 1865, “The town and borough of Llantrisant is perched upon the mountains and by position is like one of the Italian towns of the middle ages. It is a place where it can easily be imagined that men would have resorted at an early period, and have settled for mutual defence. “Having formed a settled community they would then feel the requirements of a civil government. To satisfy these they would have sought from the crown, or some powerful lord, the authority needed for the regulation of their civil affairs. “This they seem to have obtained by a Charter, granted to them by the Earl of Warwick in the reign of Henry VI. That Charter creates a municipal government, and gives to the Burgesses the administration of the law among themselves. “

"They had a Constable of the Castle, a Portreeve, to whom the civil power was confided for their government and various local officers. The extent of their jurisdiction was marked out by distinct boundaries. The members of the municipality were associated for purposes of common defence. They would have to share in the watch and ward of the town, and would have been compelled to bear all the burthens and to discharge all the duties imposed on all those admitted to the membership of the municipality."

From the date of the Charter to 1886 Llantrisant was among a number of Municipal Boroughs in the County of Glamorgan. The exercise of the borough’s powers became very unsatisfactory and “rotten” over intervening centuries. In a report of 1835 the Commissioners on Municipal Corporations issued their first report which stated – “most uncomplimentary about the staye of the town and about its inhabitants in general.”

The Municipal Corporations Act of 1883 saw the dissolution of Llantrisant as a Municipal Corporation but under the provisions of the act the properties of the old corporation were to be administered under a scheme established by the order of the Board of Charity Commissioners in England and Wales. This was followed in 1889 by the creation of the Llantrisant Town Trust, in an Order sealed on 17 December 1889 by the Board of Charity Commissioners.

Under this order, Trustees were elected as: “Nine Freemen Trustees, three by the Vestry of the Parish of Llantrisant and one by the Cambrian Archaeological Association.” The Trust were given powers of administration of the ancient Borough property, management of the Commons of Cymdda and Graig, enrolment of Freemen, maintenance of the pump and improvement of the Town. They inherited under the Order, the Silver Mace of 1633, almost £536 in government bonds and £45 in cash. 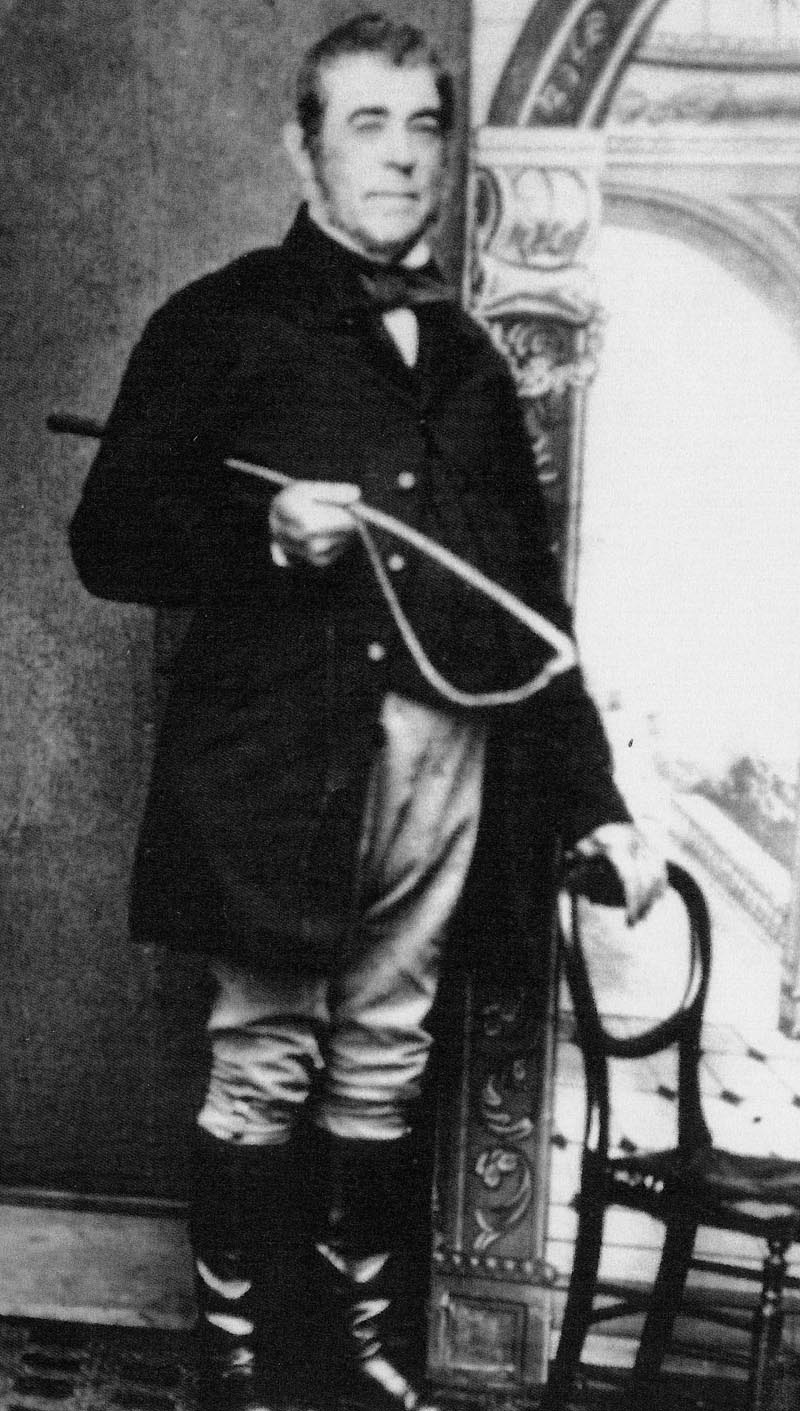 He married Catherine Jones, of Monknash, on 18 August 1833 and they had three children named Martha, Edward and Catherine.

By 1841 they lived at Caergwanaf Farm near Miskin, and moved to Ty Isaf farm in 1851 before settling in the Ivor Arms, Brynsadler.

On 21 February 1861 “a brutal attack was made on W. Morgan, who is well known for his philanthropy and kindness to the inhabitants.”

It was revealed the perpetrator was the young ex-portreeve Josiah Lewis. In April a private adjournment took place, the cross summonses were dismissed and each party was ordered to pay costs.